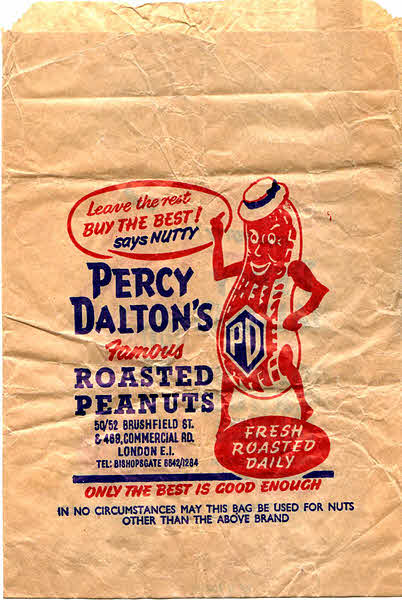 Make sure your volume is on: "George remembers how Percy Dalton started"

The story in my family is my dad was in the army, he was in REME [Royal Electrical and Mechanical Engineers], and they was out in Germany driving lorries delivering stuff up to the front – food, ammo, anything like that.

My dad was from Stepney, and one of his best pals was from Stepney, they used to work for a haulage firm around there called Poulters. And this Percy Dalton said to my dad, “What are you going to do after the war, Joe?” He said, “I’m going back to driving I suppose, nothing special.” He said, “You know, I’ve got an idea,” he said. “You know peanuts? I want to do peanuts. I want to buy peanuts, bulk, and package them up and sell them to people.”
You can imagine, they were all sitting around, all the old soldiers, and they said, “Shut up!” And his nickname after that was ‘Peanut’.

In them days it ain’t like now. When shipping came into the dock, as long as you had a valid reason to be in there you could go into the dock. And through the people like stevedores and the companies that unloaded the ships, and what his plan was to go in there and buy the peanuts, bang bang crash as they hit the ground, you know what I mean. So he’s getting big money. Silly money buying them, selling them on at probably double, and turning over a fortune. Which works!

He’s one of these sort of people. It’s like when people probably first thought about the internet when that first started up. When somebody first said that, they’d say, “Listen…it sounds great…but it’s never going to work!” You know what I mean?

The Percy Dalton peanut processing factory on Dace Road was one of the longest industrial survivors on what is called ‘Fish Island’ (where all the streets are named after fish). Dalton’s continued in operation until the late 1990s when it finally moved out of London, and was later sold to KP.

One of the company’s most recognizable brands was Monkies, named after the term ‘monkey nut’ for peanuts that are sold in their shells.

Percy Dalton was proud and protective of his brand. The paper bags used by vendors to sell his nuts said "Percy Dalton's famous roasted peanuts. Only the best is good enough. In no circumstances may this bag be used for nuts other than the above brand."